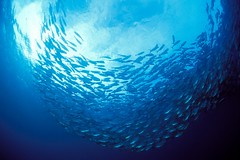 The Sir Yue-Kong Pao Gallery explores the ocean: a rich, fragile, contested and still little understood part of the Earth.

The riches of the ocean are revealed both in the excavation of old wrecked ships by archeologists and in the wonders of modern technology that enable valuable resources to be mined from the depths.

The fragility of the ocean`s ecosystem and some of the causes of its decline can be seen from the billions of tons of waste that is dumped in the sea.  Climate change plays a part in altering the balance in the ocean`s habitat, raising fears that species will be lost, some before they have even been discovered.

The resources of the sea and accusations of pollution have long led to disputes between countries.  There are some examples of these in the gallery with explanations on how they have been resolved.  There are also accounts of how science and international cooperation enhances an understanding of the sea and its absolutely vital role in the delicate balance of the planet.

The gallery is sponsored by Dr Helmut Sohmen to honour the group’s founder, Sir Yue-Kong Pao.