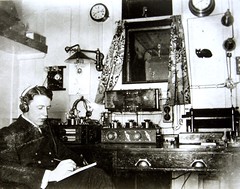 For those of us on land, communications have long been a matter of picking up a telephone.  Until very recently it has been anything but as simple for a seafarer, who went to sea knowing that there would be no contact with family and friends for the duration of a voyage. However, a ship had to make contact with other ships and land somehow, whether to send or receive danger signals, ask for advice or keep abreast of the news.  The K C Maritime Gallery illustrates just how ingenious mankind could be.

Before radio and electronic contact became the norm, ships communicated with other ships and shore by flashing lights, hoisting flags and even by pigeon.  For close-by communications bells, gongs, sirens, whistles and horns were the signals of choice, each delivering a different message according to its special pitch and pattern. Later, radio contact and the invention of Morse Code revolutionized communications at sea and there are many examples of momentous events that were signalled in this way, such as the distress calls of the Titanic .

Cables laid under the sea spawned companies offering a cable service with a cost for every word, prompting an enterprising Norwegian firm of shipbrokers to develop the BOE code, in which groups of five letters could mean a sentence.  This code, enshrined in an enormously fat volume, provided short-hand for every kind of message, ranging from details of events at sea for which a captain sought advice to fixing cargoes.

Today`s generation, so used to instant contact, can come and marvel at the inventiveness of their forbears and even try out some of the old methods of communication  for themselves.  The gallery perfectly tracks the fascinating history of staying in touch.

The K C Maritime Gallery is sponsored by KC Maritime Limited in honour of the company`s founder, Lokumal K Chellaram .