Cultural Encounters in Maps of China

Long Gallery*, Small Theatre and B4 Gallery of B Deck

To complement the 36th International Map Collectors’ Society (IMCOS) Symposium held at the Hong Kong Maritime Museum (HKMM), a special exhibition titled “Cultural Encounters in the Maps of China” curated by the HKMM together with the Guest Curator K. L. Tam, featuring over thirty maps and charts of China and East Asia between the sixteenth and the twentieth centuries, is presented. They vividly outline the development and the cross-cultural interactions of mapping technologies in early modern China, a theme which has been rarely presented to the general public. The exhibits on display are from the HKMM collection, alongside long-term loans from important private collections, particularly those of K. L. Tam and Dr. Gordian Gaeta.

*Long Gallery section will be ended on 2nd November, 2018

This Water in the Balance exhibition is part of the “Jockey Club Water Caretakers of Tomorrow Programme” organised by Ocean Recovery Alliance and funded by The Hong Kong Jockey Club Charities Trust. The programme has developed an educational curriculum focussing on water systems, from mountains to the sea, for early secondary schools. The concepts explored in this curriculum are illustrated in this exhibition which is designed by One Bite Design Studio, through the journey of “Water Jai” by &Dear.

(Please click here to buy the exhibition catalog)
Silver, as early currency, has been linked to global economy, maritime trade and international relations. Silver wares made by this rare metal triggered the technical and cultural exchange of handicrafts between countries and regions. Curated by the Hong Kong Maritime Museum and co-organized with the Home Affairs Bureau, Hong Kong Special Administrative Region and Guangdong Museum, this exhibition is divided into six sections, including ‘Global Maritime Trade’, ‘Making of Chinese Silver’, ‘Export Silver’, ‘Workshops in Treaty Ports’, ‘From Canton to Hong Kong’ and ‘East Meets West: Table Etiquette’. Taking the role of silver in global economic development as a starting point, it explores the origins of Chinese export silver, Hong Kong as a trading hub of export silver during the late nineteenth and the first half of the twentieth century, and Hong Kong’s close relation with other silver manufacturing centers in China. Selected from the prominent collections of the Guangdong Museum, the HSBC Archives, Hong Kong Museum of History, Hong Kong Museum of Art and a number of local collectors, this exhibition is organized in conjunction with the celebration of the twentieth anniversary of the establishment of the HKSAR.

The photographs making up this exhibition are drawn from an extensive body of work - an ongoing project documenting life in Hong Kong. A key feature of Hong Kong is its living harbour together with its extensive coastline and the islands. On the waters surrounding Hong Kong – at the water’s edge, so to speak - here we will find the life and soul of Hong Kong.

On Sharks and Humanity is a powerful contemporary art exhibition co-curated by Parkview Arts Action and the Hong Kong Maritime Museum, and launched in partnership with the international non-profit organization WildAid.

With the aim of raising public awareness about the pivotal role sharks numbers play in maintaining the balance of the marine ecosystem, and the urgent need for shark conservation, the exhibition brings together 36 top international contemporary artists that have joined forces to raise awareness on the negative impact of the shark fin trade.The featured artworks also function as a unique and interactive dialogue alongside the museum’s maritime collection.The first of its kind, the exhibition demonstrates the relationship between art and society, and emphasizes the social responsibility of museums, artists and the public.

The exhibition will be held both inside and outside of the museum, as the fifth edition of a multidisciplinary exhibition that has been shown previously in Monaco, Moscow, Beijing and Singapore to great acclaim.

Kindly be informed that the following exhibits have been dismantledsince 11 September: 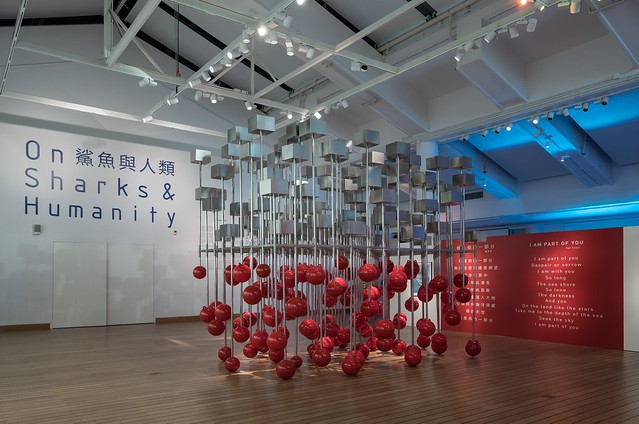