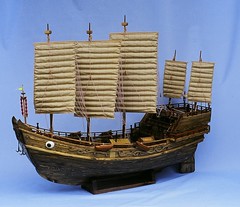 The Robert Y.T. Chen Gallery presents the maritime world of traditional China, tracing the roots of its famous and distinctive sailing junk`s hull and rig from the earliest days of rafts, dugouts and coracles.

Covering the period from the Song Dynasty through to Qing - the days when China`s fleets ‘ruled Asia’s seas’ - the gallery tracks the growth of China’s trade routes. The diverse and exotic goods that were traded, so prized by people from near and far, are on display and can be both seen and smelled.  An interactive timeline plots China’s progress in maps, comparing it to developments elsewhere. There are also the displays describing the seven extraordinary voyages of the Treasure Fleets of Zhenghe to admire.

The gallery has been sponsored by Grand Seatrade Shipping Company Ltd. in memory of its founder, The ‘Grand Old Man of Shipping’, Robert Y.T. Chen.