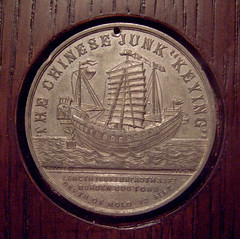 The extraordinary model of the Keying, which the Museum is lucky enough to have on view in this display, was built on a scale of 1 to 12. The three-masted Chinese trading junk, built of teak, was the first junk to sail around the Cape of Good Hope.

She left Hong Kong in December 1846 and moored in New York the following July, where she remained for several months as a much visited tourist attraction.  The Keying sailed on to Boston in November 1847 and then to England, arriving there at the end of March 1848 where a medal was struck in honour of her visit.

The display has been sponsored by Taiship, in honour of the company`s founder, D.L.Wu.