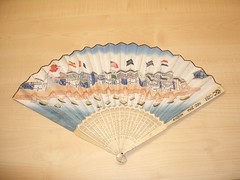 A rich collection of paintings and artefacts displayed in The Anthony & Susan Hardy Gallery gives testimony to the Canton Trade, an arrangement between China and foreign governments that limited trading to one port, Guangzhou, known to Europeans as Canton.

This trade, which began in 1757, was plied by foreign merchants in a small group of thirteen ‘factories’ with Chinese `hong` or middlemen facilitating deals.  The trade encompassed a range of Chinese produced goods, many of which are on display in the gallery and include tea, paintings, furniture, silks, hand-painted wallpapers, fans, lacquer ware, porcelain, ivories, pewter ware and silverware.

The great wealth of the trade between China, Europe and America passed through the hands of these merchants. However, few western goods found a significant market for their own goods in return, making the trade one-sided.  In the late 18th century, the British and Americans used the import of opium into China to redress the balance of trade, resulting ultimately in war and the end of the Canton Trade in 1839.

This gallery has been sponsored by Anthony & Susan Hardy who have also donated a great many of its treasures.