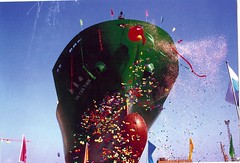 The first section of the Swire Gallery documents the growth and success of Hong Kong`s port, emphasizing how appropriate it is for the Hong Kong Maritime Museum to be on the waterfront.

The central theme is the port`s working life and how it developed from 1841.  In common with other busy ports, Hong Kong was highly labour intensive, providing employment for workers in almost every aspect of the maritime industry ranging from dockers, tugmen, lightermen and salvors to shipping office and tally clerks, in a frenetic world of comings and goings, heat and noise.

As well as images, models recreate the layout of the port, and artefacts – such as the anchor from the Jahre Viking/Seawise Giant and a diesel engine the size of a house – show the sheer scale of the ships that used it. An interactive display provides a glimpse of what parts of the Hong Kong Harbour looked like in previous eras and there are accounts of what happened to ships at the end of their life (some were turned into blocks of flats to create homes in 1960s and 1970s Hong Kong) and of Hong Kong`s own shipbuilding industry which built classic yachts, launches, ferries and large freighters.