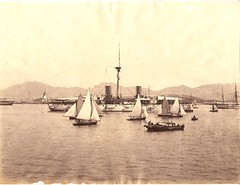 The T Y Chao Gallery celebrates Hong Kong’s development as a port from 1841 until just after the ending of the Japanese occupation and reoccupation by the British in the 1945.

The gallery begins with a description of Hong Kong as it was when the British acquired the territory in 1841.  Though there were just a few fishing and farming villages and a small population of 3,000 to 4,000, it boasted one of the best natural harbours in the region. Soon the foreshore bristled with jetties, office buildings and godowns, and a burgeoning population of merchants laid the foundation for modern Hong Kong. By the 1880s Hong Kong was the most advanced port in China.

The gallery contains a history of ships, recounting how western ships moved from sail to steam, while the Chinese coastal junk endured. The waning and waxing of Hong Kong`s population is described as well as the territory`s tribulations during the Second World War and its post war revival.

The gallery is sponsored by Wah Kwong Maritime Holdings Ltd. in honour of the company’s founder, T Y Chao.