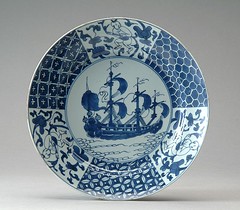 The beautiful ceramics of the great China Trade, so coveted by consumers in western countries, became perhaps the most important of the trades between China and the West.

So many items were produced, ranging from porcelain fit to adorn an Emperor's table to everyday pieces designed for European tastes.  The elegant shapes and intricate designs influenced fashions and styles for centuries.